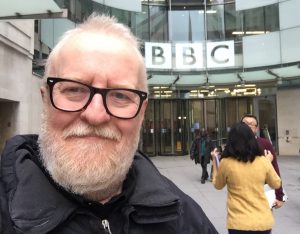 Brian Luff’s fairy story “Refusal” was nominated for Best Animated Short at the Paris Film Festival 2021. He is a multi award-winning film maker and scriptwriter. After starting his career as a TV journalist and cartoonist, he co-wrote the cult Channel 4 comedy series Pets and wrote sketches for Simon Pegg’s TV series “We Know Where You Live”. He has since scripted numerous comedy shows at premier Edinburgh Fringe venues as well as writing a critically acclaimed stage comedy “The Moon’s Not a Virgin Anymore”.

Brian created the Comedy 365 podcast which has had over 12 million downloads. He has also edited the official BBC comedy web site and been an occasional visiting lecturer in comedy writing at Bournemouth University and the BFI.

Since 2015 Brian’s panto scripts have been produced in theatres all over the UK.  For the forthcoming panto season you’ll find original scripts on this web site for Aladdin, Cinderella, Jack & the Beanstalk, Dick Whittington, Sleeping Beauty, Robin Hood, Snow White, Beauty & the Beast and Mr Scrooge.